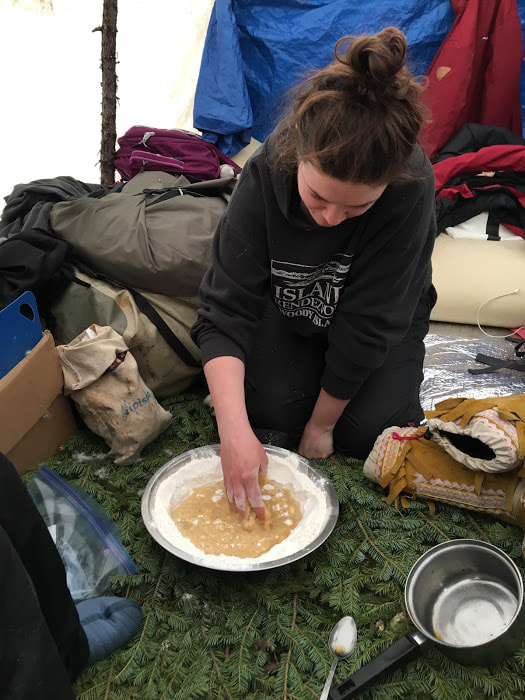 ID: Erin is kneeling inside an Innu tent. She's surrounded by camping supplies and there are a bed of evergreen branches under her. She is making donuts.
Erin is a to-do list master, an enthusiastic and perpetual learner, a relationship builder, a big proponent of the Oxford comma, and a fierce advocate for social justice. She holds a Master’s degree in Cultural Anthropology, with her research focusing on the historical erasure of Indigenous identity in Newfoundland, and has been awarded multiple awards and fellowships for her work including the SSHRC CGS Master’s Fellowship and Memorial’s F.A. Aldrich Fellowship. Excited to learn that there exists a career where you can be organized professionally, she also earned her Master’s Certificate in Project Management from Schulich School of Business and York University.

The winding path that has been her career-thus-far has carried her through the arts and heritage sectors, the tech start-up world, and even across the Atlantic Ocean, but Erin is thrilled to have found the rare opportunity to combine engaged anthropology and project management, along with the chance to work with a team that shares her values. She has a love of trying new things, a quality that has resulted in an ever-expanding list of hobbies (the most recent of which is her quest to create and subsequently eat the most perfect loaf of sourdough). She sings in Lady Cove Women’s Choir, serves on the St. Michael’s Printshop Board of Directors - among many other volunteer pursuits - and has a pesky habit of surprising her husband with stray puppies that she has smuggled home from Labrador. She loves a long hike, a strong coffee, a challenging escape room, and especially all of the above enjoyed with her favourite humans and furry friends.