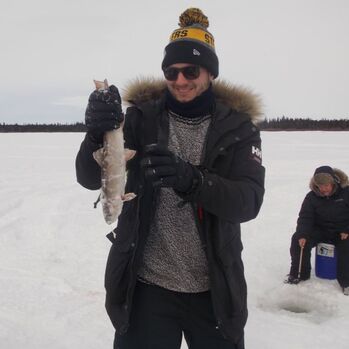 ID: James is outside on a frozen body of water wearing sunglasses and winter clothes. He's holding a fish that's just been caught and smiling.
James Lanning, known lovingly by his team as “the accountant with a personality” (sorry other accountants) is a Gander boy, born and bred. Growing up on the hockey rink, he had aspirations of one day going pro, but when he was diagnosed with Lymphedema at 14, and realized the NHL wasn’t going to happen for him, he had to pivot. Aurelia is glad that he did!

James graduated from Memorial University with a B. Comm in 2014, and joined the Seafair team later that year. He liked it so much, he has stuck around ever since, holding diverse roles over the years including Assistant Controller within the Care Partnerships division, Controller for the whole group of companies, and now Director of Ops with Aurelia and General Manager for Keen Payroll.

He earned his CPA in 2017, his Master’s Certificate in Project Management in 2018, and his title as dog-parent in 2019 with the adoption of his golden boy, Sonny.

James is an excel-whiz and a planner, often getting co-opted into trip planning for his friends (you know he always comes in under budget!). When he’s not building spreadsheets at lightning speed, or watching football or hockey, James sometimes dabbles in speaking at Provincial and National Conferences about his experience of living with Lymphedema.