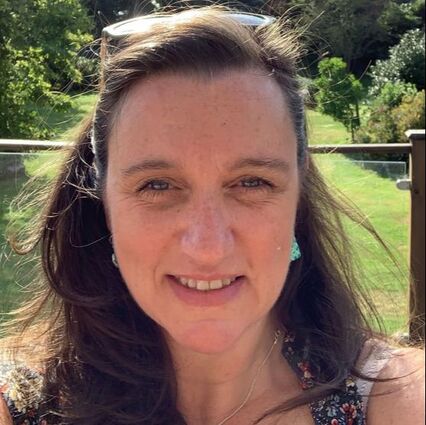 ID: Melinda is outside on a deck. It's a sunny day, and she is smiling at the camera. In the background, there is a vibrant green lawn and trees.
Born and raised in England, Melinda originally trained as a dancer and musical theatre artist. After her mom's sudden passing, she enrolled at the University of Surrey to study Dance and Culture, earning a First-Class Honours Degree. She has worked with Siobhan Davies Dance Company, Council for Dance Education and Training, Greenwich Dance Agency, and the Royal Opera House.

When Melinda’s twins reached school age, she looked for employment outside the arts world and landed at a secondary school as assistant to one of four Head of Houses responsible for the welfare of 250 students. Within two years, Melinda was the first non-teacher ever to be promoted to Head of House.

In 2010 Melinda moved to Newfoundland and after a short contract in the dance community she was offered and seized an opportunity as Executive Assistant with CareGivers/Blue sky Family Care. She has steadily progressed through a range of roles with Blue sky, from Manager, Administrative Support Services to Director, Quality and Administration, and currently serves as Executive Director of Aurelia.

She is known for her ability to complete large projects on time and on budget, her empathy, her organizational skills, her determination, and her pronounced English accent (especially when she gets mad). She writes kick-ass proposals and can whip up a project budget on the back of an envelope. Colleagues have described Melinda as fiercely loyal with high ethical standards. She refuses to accept the status quo and cannot turn the other cheek on an injustice.
​
Although Melinda’s career path has veered in differing directions, the movement towards addressing injustices, improving access, and contributing to sustainable improvement in quality of life has been a constant undercurrent. If someone had told the 14-year-old who went off to ballet school where she would be years later, she would have gotten very English very suddenly, but after she had time to breathe she would have said, “sounds like a challenge, I’m in!”